Not Campy (But Close)

Back in the Retro era, it was fairly common for bicycle manufacturers to offer their own "tweaked" versions of Campagnolo's products. One common item was a crankset modified for the builder--Colnago, for instance, would engrave their "spade" logo and name into the chainrings.

Shown below is a more unusual variation--in this case, Colnago created an entirely new, six-arm crank that was engraved with their logo and Ermesto Colnago's name. This crankset was perhaps offered as a stiffer alternative to the standard five-arm cranksets made by Campagnolo. Whatever the reason, the design didn't last, and six-arm cranks today are as scarce as ... six-fingered bike mechanics. 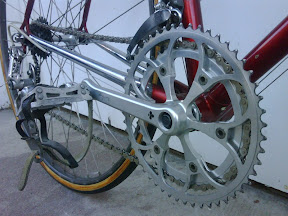 Thanks to reader Thomas B for sending in this photo.

- Posted using BlogPress from my iPad