This Weekend's Ride: A Little 200-Mile Spin Through Northern California

Those of you who follow the exploits of the CampyOnlyGuy know that we've been doing long distance riding for a while (actually, since our first double century ride in 1983). This weekend, we'll be at it again, riding the 200-mile Knoxville Fall Classic Double Century.

Completing Knoxville will be an accomplishment in itself (think miles of uphill, with extended stretches over 10% grade), but it will also keep us at the top of the all-time California Triple Crown completion list. Yes, your CampyOnlyGuy remains the only rider to complete the CTC every year that the competition has been offered--22 years so far, and 23 after Saturday's Knoxville.

If you're on the road in NorCal this weekend (or on the Knoxville DC), please say hello. We're always happy to talk to fellow Campy fans.

We'll post photos from the ride (and hopefully some video, too) when we're done.

We'll be adding this to our Campagnolo Tattoos page, but for now, you can enjoy reader Jared B's nice ink here on the C-O blog: 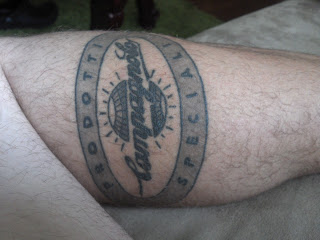 "Slaying the Badger": The Campy Only Review

The Tour de France has never been a "clean" race. It takes only a cursory glance at the race's history to find that, even a century ago, racers were doping (and often getting caught) in an attempt to grab cycling's biggest prize. The current controversy over Lance Armstrong's alleged use of a variety of techniques to ride his way to seven Tour wins is only the latest episode in a storied history of cheating--and it won't be the last.

In the midst of all this hand-wringing about drugs and cheats, comes a book that hearkens back to a (somewhat) more innocent time, when the three-week rolling soap opera that is the Tour was dominated by two men: Breton Bernard Hinault and American Greg Lemond. "Slaying the Badger" (Velo Press) provides a compelling insight into these two men and the Tours of the 1980s that cemented their reputations as two of the sport's greatest riders. The fact that they did it (as far as we know) without doping makes the story all the more remarkable, and serves as a lesson to today's riders: Yes, it's possible to have an incredibly compelling race that doesn't rely on illicit drugs.

For those of us who can't make it to Eurobike: The folks at BikeRadar.com took a video camera to Eurobike to get an interview with a Campagnolo official about the new, budget-priced Athena version of their electronic gruppo. Read their review (with video) here.

Campagnolo's spokesman says the system's battery will go 2,000 Km before needing a recharge, potentially opening electronic shifting to the randonneuring crowd. Let's see how many riders show up at Paris-Brest-Paris in 2015 with battery-powered shifters ...

More photos after the break.

The annual Eurobike trade show is under way, and the folks at Road.cc have a pretty extensive report on new stuff at the show, including a brief glimpse at Campagnolo's trade booth (scroll waaay down on the page). The only Campagnolo product they mention are new EPS bar-end (time trial) shift levers:

If you're at Eurobike and have a camera, send us photos (enorris [at] campyonly [dotcom] ) and we'l post them here.