Reader Jim R sent this photo of a classic Schwinn Paramount that he's restoring. It's not complete yet, but what's done so far looks might good.

Thought you might want to see a photo of the bike with your brakes (bought on 1/4/11). I finally found the time to install all the parts, including the brake calipers, which I've been collecting for some time now. I decided to postpone the touch up of the frame since that may take quite some time & I couldn't wait any longer to actually ride it. Its a bike I've long lusted after (a common affliction apparently), a '73 Paramount & it rides just like my friend's from Junior High. Eventually, after the touch up, it'll make its way to "The Museum" (bikemuseum.orbs.com). 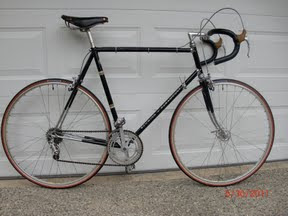 - Posted using BlogPress from my iPad2