It's been a few months since we purchased a Magnic Light system and began using it on two different bikes. Now, it's time for a review. This review continues the intro we posted here.

Magnic Light began as a Kickstarter project that promised something so outlandish that it was dismissed by some as a hoax: a friction-free, effort-free dynamo lighting system that drew power from the movement of an aluminum rim past small, self-contained headlight and taillight units. Still, the project drew enough backers, and last year the first version of the lights (more on that later) was released.

It's currently available in two places: the Magnic Light web site (located in and with shipping from Germany) and Clever Cycles, a Portland, OR, bike shop that sells both from their store in Portland and online. Clever Cycles sells a complete system (two headlights and one taillight, plus mounts to fit your bike) for $250. The price at Magnic's web site is about the same: 192€ (currently $262US).

A complete system looks like this (photo from Magnic's web site). The light head snaps into a bracket that fits onto the bike.

Each lamp unit contains two LEDs. The taillight's LEDs are red, and the housing is red--it throws some light in all directions.

Several different types of mounts are offered. They fit standard caliper brakes (by clamping to the fork for the headlights and mounting to the brake caliper for the taillight), cantilever brakes (mounted to the pivot bolt that holds the canto arm to the frame or fork), V-brakes, and suspension forks. We tried out the first two--caliper and cantilever--in our testing.

We mounted the lights to two different bikes, using two different mount kits. The lights swap out relatively easily between bikes; you only need to buy one set of lights unless you plan to ride more than one bike at the same time.

Based on our experience, the cantilever installation was much easier. The brackets attach by removing the bolt that holds on the canti arms, holding the bracket in place, and replacing the bolt. That takes all of about 2-3 minutes per light. Adjusting takes a few minutes more, and you're done.

The caliper mounts were a bit more difficult, and took about an hour. The instructions that came with the lights weren't 100% clear on exactly how all the pieces go together (Magnic's custom bracket fastens to a Cateye-made mount), and we struggled a bit to get everything assembled correctly and installed on the bike. Making sure that the bracket cleared the front brakes took some doing--it's a very tight fit. Here are photos of the finished installation on our Rivendell Road: 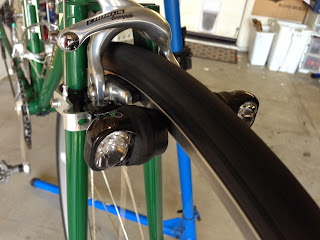 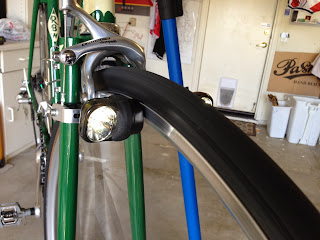 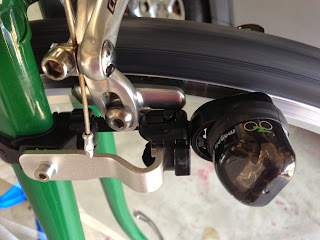 The bottom photo shows how tight the clearances between the brake and the light are--there's very little space, but nothing rattles, and the lights work as they should.

After installing the brackets and fastening the lights, the next step is to adjust them for minimum clearance. The lighting units need to run close to the rim and with a vertical ridge on the rim-facing side parallel to the radius of the wheel. We have found that the headlight are tolerant of adjustment that's a bit off, but they work best when they run as close to the wheel as you can get them.

At the back of the bike, the lights mount a little differently for the caliper model (the canti version uses the same mount as the front). The bracket for the caliper version taillight fits onto the brake itself, as shown below: 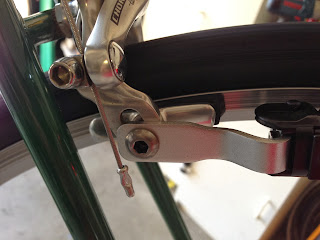 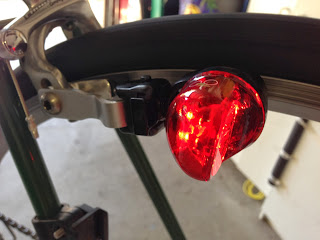 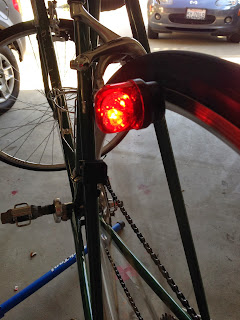 On our test bike, which is equipped with Campagnolo Chorus brakes, we had to drill out the hole in the Magnic bracket so that the brake shoe bolt would fit through; the stock hole was about half as big as it needed to be.

We mentioned above that the lights are somewhat sensitive to their adjustment with relation to the rim, and this comes into play at the rear with caliper mounting. In this configuration, the taillight has to be adjusted so that it comes close to, but does not touch, the rim when the brakes are on. This means that when the brakes are off, the light is farther away and doesn't work quite as well. The taillight is still plenty bright, but in the brakes-off position the light will be brighter with the canti mount, which stays in the same place regardless of whether or not you are applying the brakes. (Magnic calls the brighter-when-braking phenomenon a "brake light," which helps notify the rider behind you that you're stopping.)

The lights come with a quick-release feature that is somewhat tight and difficult to use; it's a bit of a struggle to get the lights off the bike. We tried applying some stick lubricant, which helped but not much. Plan on working with the lights for a minute or so when moving them from bike to bike.

The final bit of installation involves installing an optional rubber seal around a joint on the light heads. Even though we don't ride in the wet very much, we did that. A bit of liquid soap or Armor-All will help slip the seals on.

Once they're installed, the lights need to be adjusted for throw--that's easy, as the headlight and taillight units rotate. Then you just start riding.

As noted earlier, the idea that power could be generated just by the motion of the rim was discounted by some ... until the lights came out. We are not engineers, and we're still not entirely sure how they work, other than that very strong magnets are involved (Magnic provides a carrying case to keep the magnets from getting too close to other things--credit cars, cell phones, etc.--and messing with them). It's clear that something is moving inside the unit, which is hinted at in this photo from Magnic's new Kickstarter page:

The photo seems to show the neodymium magnets arranged around a central bearing, which suggests that they're moving. If that's the case, we wonder how long that bearing will last, given that it's rotating all the time while riding.

In our tests, a properly adjusted set of headlights comes on at about 4 mph and achieves maximum brightness by about 10 mph. If you're careful, you can adjust the throw of the headlight while riding the bike; the taillight needs to be adjusted when stopped, for obvious reasons (unless you're a circus performer with exceptionally good balance). One of our test bikes has fenders, and we haven't found that the front or rear fender negatively affects the usefulness of the lights.

When you stop, the lights go off immediately. There is no "standlight" function, which means that if you're using only a Magnic headlight or taillight, you'll be entirely dark when stopped. This could be hazardous if you need to stop on a dark road if you're also not wearing any reflective gear and don't have any other lights or reflectors on your bike. We ride with both, so the off-when-stopped operation didn't bother us. (See the last part of this review for news about Version 2 of the lights.)

On the other hand, because the lights are always on while moving, they also serve as daytime running lights. Riding partners tell us that both the headlights and taillight are visible in sunlight. That's a nice safety feature, particularly in wooded areas where you may be riding in dark shade part of the time.

How Bright Are They?

Magnic rates their headlights at up to 30 lux for the "sports" version of the light. A different "city" version that comes on at a lower speed gets up to 20 lux.

How bright is that? Unless you're an engineer, don't try to figure it out.

Based on our testing, the lights are definitely bright enough to ride by. We have use them on many nighttime rides, always in conjunction with a helmet-mounted light (a Joystick by Exposure Lights), and they provide sufficient light for safe riding on dark streets and out in the country. When we rode a double century that involved some 40 miles of nighttime riding and a few fast downhills, we used a higher setting on our helmet light; the Magnic lights achieve maximum brightness at low speeds and don't get brighter when you go faster than about 10 mph.

Ironically, the lights perform less well on well-lit city streets, but's that's because your eyes adjust to the higher light level--the streetlights overwhelm the light generated by the Magnic units.

This isn't a criticism of the Magnic units--any headlight works far better in a very dark environment. Your eyes adjust to the darkness, and the lights seem to work better. In fact, even though the Magnic headlights throw far less light than the B&M LED light on one of our test bikes, the experience of riding with the Magnic lights is a bit better--the very bight illumination from the B&M light dimishes your night vision, making it somewhat harder to see what's outside of the pool of light thrown by the headlight.

To compare the two (Magnic and B&M LED), we made this video:

The B&M light is clearly brighter, but the Magnic lights are also fairly bright.

Obviously, the question of whether the lights are bright enough is subjective, and will be based on how good your night vision is and how bright you want your lights to be. For example, Schmidt just released an update to the Edelux that offers almost daylight-bright illumination. If you want that much light, the Magnic system is not for you.

A new Magnic Kickstarter campaign will be starting this month (December 2013) to fund the production of an updated version of the lights that will introduce several new features: a brighter LED light, a new lens that will focus the light better and direct more illumination toward the road, and a standlight function. For the first time, the lights will also feature an on/off switch (not really a must-have, in our opinion), and the ability to put the taillight in flashing mode (a nice idea but not useful if you're following randonneuring rules strictly).

Of these, the LED, lens, and standlight functions will in our opinion be the most important updates. The standlight, in particular, will address one of our only concerns with the first version of the lights.

Magnic has announced on their Facebook page that the first production run of some 2,000 sets is almost sold out. The updated version is scheduled to be available around March 2014 at a lower price than the first--a $179 pledge gets you a set of front and rear lights.

If you're OK with lights that aren't daylight bright, if you like the idea of alway-on lights that require no effort and don't require batteries, wires, or a special front wheel, then it may be worth the wait to get the new version in 2014.

Please let us know what you think of this review by commenting.