Campagnolo is releasing an 80th Anniversary Gruppo to mark the anniversary of the company's founding in 1933. Here's a photo ... plenty more photos and info here. No pricing info yet, and no word on how many will be released. 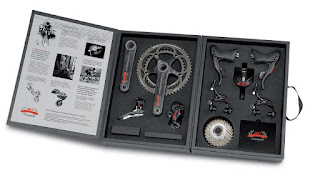 Reflecting the company's expansion in recent years into wheelsets, there will also be official 80th Anniversary wheels.  We here at Campy Only are pleased to note that this gruppo relies on tried-and-true cable-actuated shifting.

True Campy fans will recall the release of the 50th Anniversary gruppo. Learn more about that iconic groupset here.
Posted by CampyOnlyGuy